Functional coatings (FN®) were tested by a number of Czech and foreign independent professional institutions for their functionality, efficiency and safety in terms of the applicable standards. Below you can find the published results of this testing which demonstrate the high efficiency, functionality and security of our coatings both in terms of the applicable building, technical and health standards, as well as their photocatalytic efficacy and other characteristics associated with their practical use.

University of Chemical Technology, Prague – Determination of photocatalytic activity of FN® 1 – 3 according to ISO – formaldehydes

Laboratory protocol at the University of Chemistry and Technology, Prague – testing of FN ® – pollutant degradation from air according to ISO standards: the protocol demonstrates high efficiency of FN ® coatings in the degradation of NOx, acetaldehyde, formaldehyde and toluene.

VŠCHT: Degredation of VOCs and Hexane

The tests confirmed the very good ability of FN ® 2 to degrade hexane.

NOx removal from the air

Scientists from the Academy of Sciences of the Czech Republic, who have long been involved in the study of photocatalysis, have published their conclusions on long-term testing of the effectiveness of FN ® coatings in removing nitrogen oxides from the air. The paper concludes that FN ® coatings are a promising environmental technology capable of effectively purifying air from a significant pollutant – nitrogen oxides.

The Institute of Chemical Technology has tested samples from the test wall on which Advanced Materials-JTJ has been testing for a long time, in conditions of high air pollution, the functionality of coatings (high-traffic four-lane highway intersection with 30,000 cars per day). After two years, the tests proved to maintain high photocatalytic efficiency (the same as for the a new coating).

The document states that in terms of Act No. 258/2000 Coll. the protection of public health is suitable, “stated that the handling of products” (FN ®  1-3) “can be considered safe” .

VŠB – Technical University of Ostrava: Report on the Measurement of Nano and Micro-Particles in the Working Environment of the Paskov Preschool (FN ®Coating Application Tests )

The report concludes that: “The results of the subsequent analysis of captured aerosol indicate that no significant Titanium representation was found in the composition . The observed concentrations of titanium (if detected) do not exceed background levels commonly found in aerosol in the atmosphere. “In conclusion, therefore effectively it states that in the rooms where they are applied coatings in fact there is no release of nanoparticle TiO2 FN ® coating layer to the room kindergarten. Otherwise, this would necessarily result in an increase in the measured amount of Ti.

The EAA expert report shows that the toxicity of the FN ®  2  coating without UV irradiation is significantly low . Covering microscopic organisms only shows more significant toxicity when irradiated with UV light . At the same time, tests have shown that no higher toxicity (fish) has been observed even at an extreme concentration of 250 ml FN ® / 1000 ml water .

The protocol shows that the use of coatings do not affect the sensory properties of food.

SZÚ: Protocol of bactericidal and virucidal activity tests of FN ® 2

Tests have demonstrated high bactericidal and virucidal efficacy of FN ®  2 on UV activation.

Summary table for testing bactericidal and virucidal efficacy of FN ®

The high bactericidal and virucidal efficacy of FN ®  2 coatings has been demonstrated by a number of health care institutions.

Testing Institute Ústí nad Labem: Comparison of bacterial levels on walls with and without FN ®  coatings

The comparison was made using swabs. The results show that FN ®  coating effectively prevents the build-up of bacteria on the walls where it is applied.

Testing Institute of Ostrava: Testing of antimicrobial properties of FN ®

The protocol contains specific data on properties, documents and legal standards on the basis of which FN ® coatings were certified by TZÚS. Certified properties: adhesion, frost resistance, health harmlessness, reduction of viruses and bacteria. FN ® 1,2,3 complies with all applicable standards and standards.

The protocol demonstrates the high vapor permeability of FN ® 2

The study comprehensively assesses the life cycle impacts (from production and processing of raw materials to the product, its use to disposal) to the environment. The conclusion of this paper states: “Based on this study, the use of FN2 photocatalytic coating is considerably more environmentally friendly than using an air purifier.” 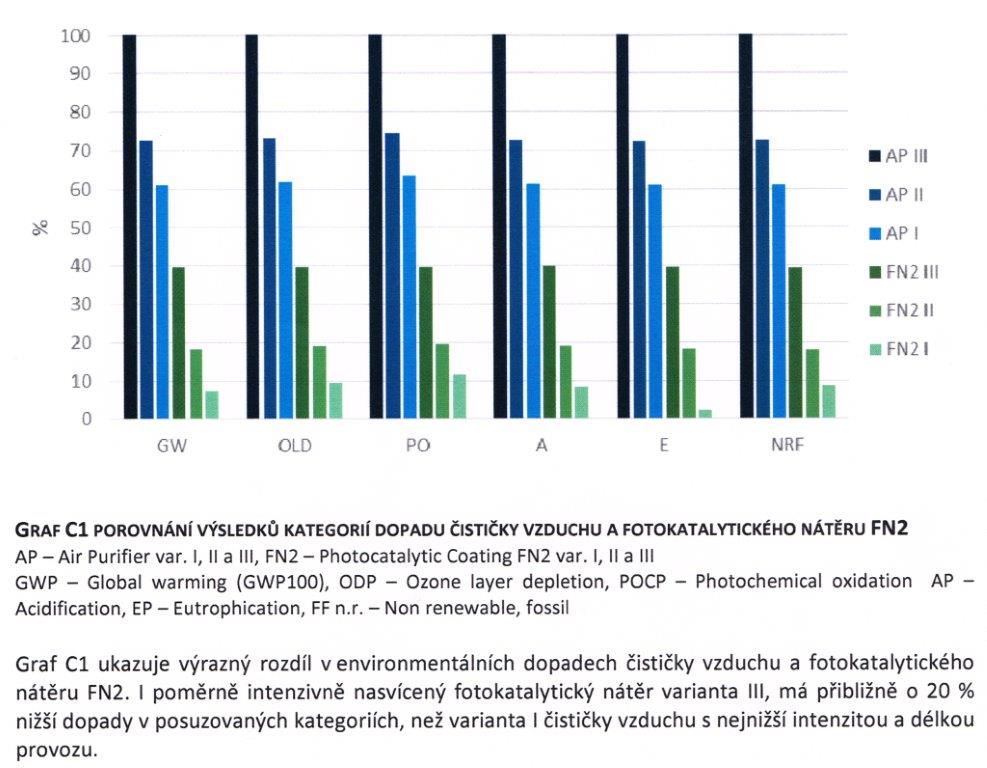 NOTICE: FN-NANO s.r.o. for commercial reasons, has re-branded the registered FN® brand. It has simplified the trade name by the deletion of the word “Protectam”, and now uses only FN ® 1, FN ® 2 and FN ® 3 for its products. For better orientation the customer can also specify the name – such as Transparent, Wood, BioMax, Aqua, etc. All documents indicate the basic product name FUNCTIONAL COATING as FN® (from ‘FUNKCNÍ NÁTER’ in the Czech language) & even the trade name Protectam, which is no longer used and will be gradually replaced by the above simplified name.