FN NANO® photocatalytic coatings show an extremely strong effect in cleaning the air and protecting the surface against the deposition of dirt and microorganisms. With their photocatalytic efficiency, they outperform competing products on the market up to a hundredfold

Mechanism against settling and growth of microorganisms

As a result, on light-activated surfaces where FN NANO® coatings are applied, algae and fungi do not settle in the external environment, and the tests performed in the interior have shown that there are practically no microorganisms on the treated surfaces.

Photocatalysis is a very gentle and environmentally friendly solution because, unlike disinfectants, it does not release any chemicals into the environment and its effects are inexhaustible – powered by daylight.

FN NANO® surface itself effectively acts to clean dust, soot and grease particles that otherwise settle on the surface of walls, roofs and other structures, causing them to appear dirty. Self-cleaning function is activated by two mechanisms.

The first is photocatalysis, which effectively decomposes all organic components micro-dust, thus preventing them from firmly adhering to the surface and subsequently penetrate into the underlying materials deeply.

The second mechanism is superhydrophilicity and the light-activated FN NANO®  photocatalyst on the surface. Normally, water droplets can flow easily on surfaces and carry dust particles easily. But since FN NANO®  coatings react well with water, there is little power for the water to allow the dust particles to stick to the surface.

Due to the combination of the photocatalytic effect and super-hydrophilicity, dirt does not stick. The organic components are burned and inorganic photocatalysis dust residues are then removed from the surface easily due to rain and wind.

Protection against the damaging effects of ultraviolet radiation

Also, ultraviolet radiation, while an aid to Photocatalytic effect of FN NANO® , it is one of the main influences that affect the degradation of the binder coatings and external mortar. This leads to their gradual decay.

Functional FN NANO® coatings contain a large amount of photoactive titanium oxide. The nanocrystals absorb ultraviolet (UV) radiation. Due to their high concentration, it does not penetrate through the coating to the substrate, practically no UV radiation penetrates.

Materials exhibiting photocatalytic activity are able to purify air from a wide range of organic and some inorganic substances dispersed in it (for example, nitrogen oxides (NOx) and sulfur oxides (SOx).

If a molecule (or a microscopic dust particle) touches a light-activated photocatalytic surface, it is oxidized by atmospheric oxygen and ultimately decomposes into basic mineral components (especially H2O and CO2 molecules). The air is purified by converting smelly or dangerous organic substances into water and carbon dioxide molecules.

The most important inorganic air pollutants are nitrogen oxides (NOx). The light-activated photocatalytic surface of FN® Functional Coatings can remove NOx from the air by significantly accelerating the natural processes leading to their conversion to a nitrate solid. However, only those materials that exhibit long-term (even after several years) very high photocatalytic efficiency can be used for effective air purification indoors or outdoors (air purification from air pollutants, at least 15% NOx (NO and NO2)).

The most important inorganic air pollution pollutant is nitrogen oxides (NOx). The light-activated photocatalytic surface can remove NOx from the air by significantly accelerating natural processes leading to their transformation into a solid – nitrates. However, only effective materials that show very long (even after several years) photocatalytic efficiency for a long time (even after several years) can be used for effective air purification in interiors or in the outdoor environment (air purification from air pollution) (with a single contact of the air mass with light activated photocatalytic surface at least 15% NOx (NO and NO2)).

The vast majority of paints with a photocatalytic effect achieve an efficiency of less than 1%. Their effect for air purification in practical operation is therefore completely negligible and immeasurable. FN NANO® coatings show an extremely high photocatalytic efficiency of about 50%. (depending on the type of coating, substrate and specific conditions such as temperature and humidity).

Only certified FN NANO® coatings have the highest efficiency on the market.

This effectiveness is evidenced by a number of laboratory tests performed by the ASCR, ICT , VŠB . Therefore, the technology of FN NANO®  coatings can be used for effective air purification both in interiors and for improving air quality in areas polluted by car traffic and industry and local heating.

Six or more coasts of FN NANO®  creates a surface on which it is difficult to apply paints with organic thinners or markers. Graffitican be easily removed mechanically with the help of pressurized water and a brush without chemical solvents and damage to the substrate.

FN NANO®  layer effectively absorbs a large amount of paint from the spray, and it is unable to saturate the surface. Indeed, any graffiti will begin to dissolve during daylight. FN NANO®  surface layer does not allow the spray color from penetrating further into the depths of the facade. Doodles, tags and other graffiti are therefore removable even after a long time. FN NANO®  layer is extremely permeable and does not prevent “breathing” ventilation of the substrate. This is very convenient for national monuments and historical buildings  The protective layer might need to be restored after graffiti is removed. 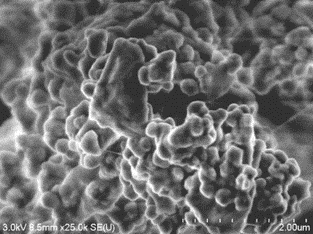 Electron microscope photo: photocatalyst crystals coated with a paint binder. This reduces the surface for photocatalysis. 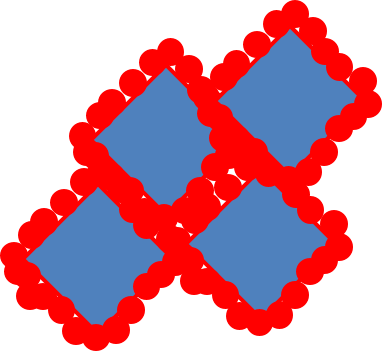 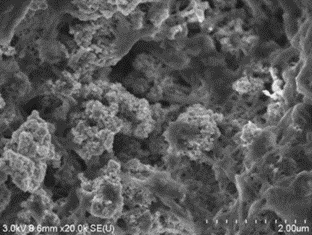 Electron microscope photo: the photocatalyst crystals are extruded in high concentration onto the surface of the porous structure formed by the binder. This maximizes the surface for photocatalysis. 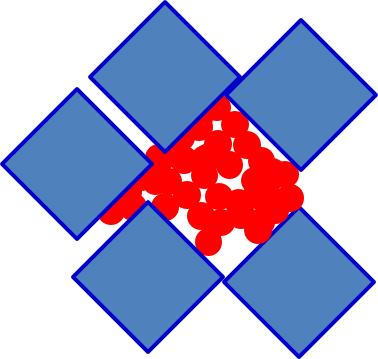 Diagram: photocatalyst crystals coat the structure of the binder.

The exceptionally high photocatalytic efficiency of the FN NANO® surface technology has been proven by a number of tests performed by independent scientific research institutions in the Czech Republic and abroad. Tests performed according to ISO standards were also used to verify effectiveness. The effectiveness of FN NANO® technology is confirmed by hundreds of practical applications in the Czech Republic and abroad 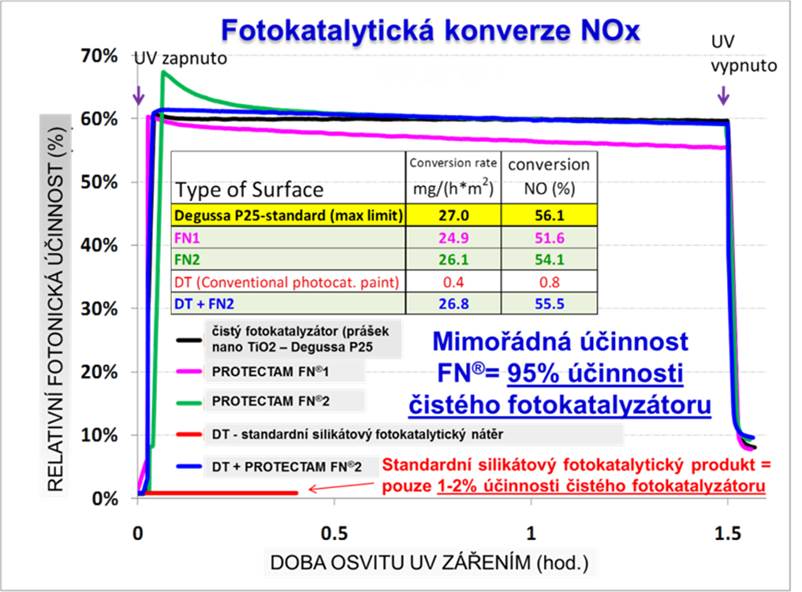 (measurement performed according to ISO 22197-1 at the J. Heyrovsky Institute of Physical Chemistry of the Academy of Sciences of the Czech Republic)

Long-term research conducted by the staff of the J. Heyrovsky Institute of Physical Chemistry of the ASCR proves usability of FN NANO® surface technology for effective reduction of nitrogen oxides (NOx) in the air of urban and industrial agglomerations. They summarized the results of their research to date in a comprehensive scientific study published in the renowned journal “Applied Catalysis B: Environmental”.

The high photocatalytic efficiency of the coating technology of functional coatings FN NANO® was also confirmed by comparative testing of commercial coatings, which was performed by the J. Heyrovsky Institute of Physical Chemistry of the ASCR. Tests have shown that the efficiency of FN NANO® is many times higher than that of competing products  : Protocol from tests performed at a professional workplace of the Institute of Physical Chemistry of the ASCR.  (In accordance with the applicable requirements of the Act on the Protection of Competition, the names of competing products and their manufacturers are blacked out) 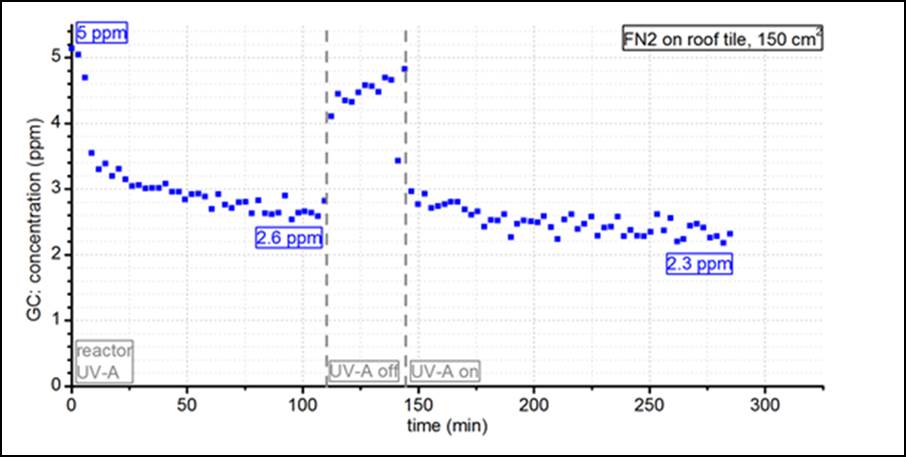 BIOCID EFFECT ON THE PHYSICAL PRINCIPLE WITHOUT THE USE OF CHEMISTRY

The ultraviolet-activated FN NANO® surface very effectively prevents the deposition and growth of microorganisms (viruses, bacteria, yeast, algae). This effectiveness has been tested and confirmed by a number of professional workplaces.

SUMMARY OF RESULTS OF ANTIBACTERIAL TESTS OF HEALTH INSTITUTIONS:

THE TABLE summarizes THE COMPLETE DEATH OF HAZARDOUS MICRO-ORGANISMS OF NOOCOCOMAL INFECTIONS WHICH CAUSE ENORM PROBLEMS IN HOSPITALS. 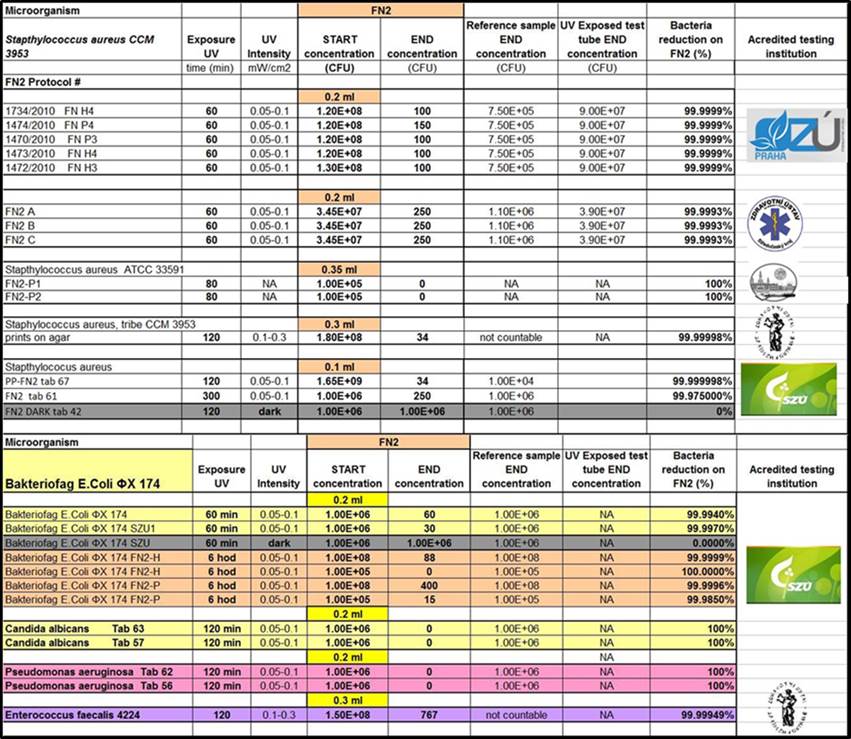