Imagine a hot plate reaching a temperature of many thousand degrees Celsius. If a small piece of organic material falls on it, it immediately burns in an airy environment and breaks down to the basic mineral components. Immediately evaporate and nothing is settled on the disc. Similarly, but at room temperature, our FN NANO® functional coatings work. These capabilities are provided by microscopic crystals of the titanium dioxide semiconductor (TiO2) and the physical phenomenon of photocatalysis.

Photocatalysis is one of the photo processes that are a natural part of our life and the nature around us. The energy of light incident on the microcrystals of the TiO2 semiconductor creates free electrons and electron holes on their surface, the action of which in combination with oxygen decomposes the molecules of organic substances into molecules of carbon dioxide and molecules of water. The technology of functional coatings FN NANO® uses the specific properties of the high surface of microscopic TiO2 crystals  with dimensions of less than 100 nanometers (nm) and physical phenomena occurring at the atomic and subatomic level. That is why it is nanotechnology. 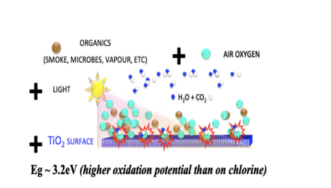 The high efficiency of FN NANO® coatings is based on the use of a special binder that is accessible to air and can keep TiO2 nanocrystals on the surface of the coating so as to maximize their efficiency and fulfill their cleaning properties even when a colored tint is added to the coating.

The properties and effectiveness of FN NANO® functional coatings  have been confirmed by a number of studies conducted by the Academy of Sciences of the Czech Republic, the University of Chemistry and Technology in Prague, the VŠB Osrava – Technical University of Ostrava and other research organizations in the Czech Republic and abroad.

More detailed information and the process of photocatalysis

The basic functional element of the FN NANO ® coating technology are photocatalyst nanocrystals in combination with light and atmospheric oxygen. The crystals are concentrated and firmly bonded on the surface of a dried coating with a microscopic porous structure.

1m² of the functional surface coated with FN NANO ® contains approx. 500m² of usable area of ​​the photocatalyst nanocrystals.

TiO2 nanocrystals are a semiconductor that transforms light energy into an electro-chemical force capable of effectively cleaning air, water and soil, preventing the build-up of microorganisms and ensuring self-cleaning of surfaces. This effect is a semiconductor effect and is called photocatalysis.

The energy of the ultraviolet component of light is converted into a photocatalytic effect, which acts only on the surface of the crystal. With this effect, the photocatalyst (TiO2) absorbs almost completely the light energy of ultraviolet radiation. Thus, a strong oxidizing effect appears on the surface of the photocatalyst due to free electrons and electron holes. The direct interaction of electrons and electron holes with the bonds of environmental molecules very effectively decomposes a wide range of organic molecules, including impurities (soot, dirt, oil, particles) and odor. This effect is excellent against the deposition and growth of microorganisms (bacteria, viruses, algae, fungi, fungi).

The absorption of UV radiation by the TiO2 photocatalyst results, in addition to the above-mentioned decomposition of organic pollutants, also a reaction leading to the formation of surface OH groups in the air. This leads to an increase in surface energy, which leads to a significant increase in surface hydrophilicity.

This effect is inexhaustible because titanium dioxide participates in the photocatalytic reaction only as a catalyst and is not consumed. The described effects are therefore very long-lasting.